Henrik Lovén, CEO
After months of lockdown and social distancing in the wake of COVID-19, consumer spending patterns have witnessed drastic changes. However, it’s not just the patterns of consumer spending that have changed, but also the ways of commanding their attention. In order to quell stress, hone their skills, and much more, consumers are looking to engage with relatable content more than ever. Herein lies the power of video content.

Video has emerged front-and-center amid this rapid transformation in the content marketing space. However, the rise of video content did not manifest overnight. Improved internet speed and connectivity created a fundamental shift in how content was consumed by consumers. Remember the days before the launch of the iPhone? The process of streaming anything was a cumbersome endeavor, let alone video. Today live streaming and video on demand is a natural and growing part of our everyday lives, we stream more than ever and 2020 pushed our streaming habits even further. Flowplayer has been around before the era of both iPhone and YouTube, continuously developing their technology to deliver on the basis of making video an integral part of any application.

Since its inception, Flowplayer has developed many iterations of their player technology, from the old flash days to the current HTML5 player called Flowplayer Native. Seventeen years in, the company has evolved to empower media organizations with its performance-first online video platform.

A Full-Stack Solution for Media Companies

Today, Flowplayer is an all-around solution for online video. It’s easy to use, ten times smaller and brings more power and control to the media industry. Over the years, Flowplayer has positioned itself as a sophisticated online video platform in the market space. The company has evolved with time to not only include player technology but also provide a full-stack solution for media companies. As one of the most deployed online video players, Flowplayer offers a minimalistic design and crisp clarity to optimize the user experience and ensure high-quality playback performance. In essence, it has perfected the web environment through its full-fledged solution that supports a variety of features, in addition to live streaming with features such as Simulive, delivery, monetization, ad possibilities, to name some. In addition, it even utilizes its expertise to develop an innovative video player technology.

Be it publishers, broadcasters, or digital media personnel, Flowplayer addresses each of their unique demands. In fact, the company has uniquely designed the core of its solution in a way that allows clients from various domains to build codes that suffice their respective needs. “We believe that the power of the web does not lie in silos but in integrations,” continues Henrik Lovén, CEO, Flowplayer. “We allow customers to easily build upon our solution and expand its capabilities.”

Shredding light to its live-streaming functionality, Lovén mentions that Flowplayer makes smooth, instantaneous streams possible for itsW customers. Having worked with numerous large-scale broadcasters and media houses over the years, the company has perfected its live solution for a seamless user experience. A single click on their mobile phone screens and users can stream live immediately. “Live streaming with us is smooth and less time-consuming. Instead of waiting for servers to provision, we already pre-warm the initial steps in our solution to kick off streaming promptly,” affirms Lovén. Also, to build excitement and anticipation, the Flowplayer live functionality includes a new feature with ability to create a live stream from already existing video assets thus creating a premium experience for the end consumer.

In essence, Flowplayer enables users to conduct streams 24/7 and hence, shifts them from an on-premise environment to a cloud-based platform to minimize interruptions and create efficient workflows. It even lets customers use the same live source over infinite time. Another interesting feature of Flowplayer live lies in its ability to ease the workflow by creating a centralized video production unit that can work with different providers and send configurations email to crew website that allows providers/users to populate the same in an effective production environment. Flowplayer also provides clients complete control over the heavily connected environment of a live loop. It provides real-time data as a heads-up to inform customers about the connectivity range, bandwidth, frame rate of streams, bit rates, and many such crucial information that helps prevent a faulty live stream. Compatible with a vast range of ad servers/networks, the solution’s analytics reveal customers’ weak spots and helps them build on it to make the biggest revenue leaps.

Paving the Way for a Highly Successful Video Business

Powered by these capabilities, Flowplayer is empowering its customers to achieve phenomenal strides toward success. A case in point is the Ringier Axel Springer Poland (RASP). For the client, video was one of the strategic and fast-growing areas. Although RASP was able to cover many aspects of users’ requirements, the user engagement was steadily dropping, and soon, RASP even witnessed reductions in inventory. RASP was not up to date with modern advertising standards and lacked a flexible and extendable solution. That was when RASP turned to Ring Publishing, a firm bringing modern, fast, extendable, and flexible video modules through integration with Flowplayer. Leveraging the power of Flowplayer, Ring Publishing successfully sped upload time for video stories, shortened user interaction with the player by single tap play, and enabled automated switching between different players. Thus, with the ability to create its own plug-ins, RASP managed to enhance the effectiveness of the AD serving model by using newer formats (vast 4.0), opening inventory for cell phones, and more. Today, owing to Flowplayer and the Ring Publishing solution, RASP has managed to significantly improve user engagement and the effectiveness of its advertising model.

Propelled by such success stories, Flowplayer is preparing to gear its capabilities in alignment with the digital future. In response to the increasing demands for digitalization, the company is data ready and looking forward to extending the functionality of its solution. To that end, it is enabling people to create their own portfolios/plug-ins/solutions and establish steady interaction using the robust Flowplayer platform. 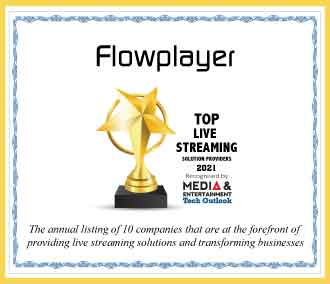